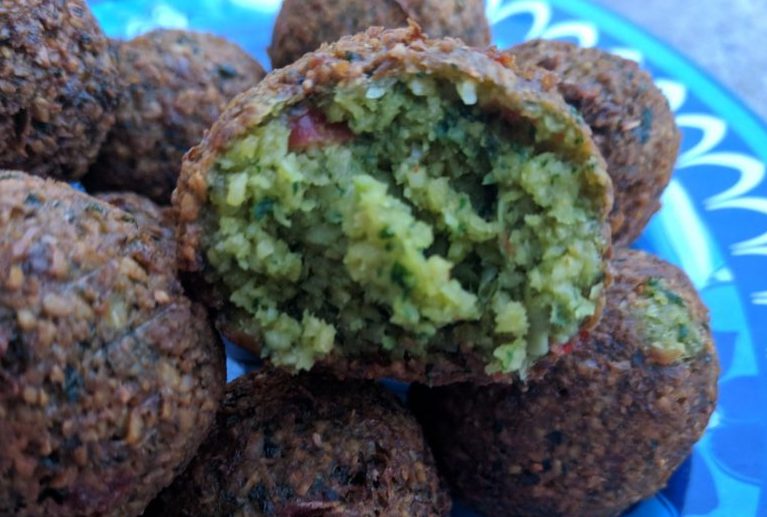 A round deep-fried patty made of chickpeas, fava beans or both (Wikipedia)

At their best they are crispy on the outside, soft on the inside, full of bright fresh herb flavor and spices. At their worst they are tough, bland and represent everything that is wrong when ethnic cuisines migrate west.

The Falafel history is highly contested. Most common theories connect the invention of Falafel with Egyptian Coptic Christians that a 1000 years ago were looking for a vegetarian dish during lent. It was made of dried fava beans and from Egypt it has spread to the rest of the middle east. Different variations of Falafel started appearing, among them the one replacing the fava beans with garbanzo beans, which is presently the most common one.

A few years ago, unless you came from the Middle East, or lived next to an immigrant population in a large city, chances were you never even heard of falafel. I credit the rise of the vegan movement in bringing Middle Eastern staples like hummus and falafel to the front line.

These days hummus can be found almost anywhere. Supermarkets and big box stores carry hummus and many variations of it, some of them bordering on ridiculous (cookie batter hummus, I swear I’ve seen it). Although the flavor of a good homemade hummus is far superior to that of a commercially made hummus, the latter is perfectly acceptable.

With Falafel, however, it’s a touchy subject. Falafel was never able to successfully make that jump and become commercial. Falafel is good the moment it is made. It must be made from fresh ingredients or the result can go horribly wrong. I still have nightmares from powder made falafels my mom fixed me once for dinner. That leaves us with only two ways to have a good falafel, buy it at a falafel shop or make it yourself.

But I have an even bigger problem. I tasted the best falafel in the world.

I was born and raised in Israel, claimed to have the best falafel in the world, and I had the best falafel in Israel. I was living in Haifa at the time, just completed my engineering degree and at the beginning of my military service in the Israeli navy. I got a tip from a local about the best falafel shops in Haifa. Couple of days later I found myself walking up a tiny street. Two falafel shops that were separated by twenty feet had lines of people stretching from their entrances. I stopped at the first one, ordered my falafels in a pita bread and literally inhaled my sandwich. It was delicious, but I was still hungry. I decided to do the foodie thing and go to the second shop for a comparison. Waiting again in line I finally reached the cashier. Ready to place my order the cashier looked at me straight and, before I could utter a single word, said, “Saw you at the other shop, go back there if you’re still hungry”.

That was that. Ashamed and slightly hungry I made my way back to the first shop. I learned my lesson. The next time I went straight to the second shop. Their falafel was even better than the first one. Later, these two shops were declared as first and second in the Israeli falafel rankings. The friendly competition between them was spanning generations and probably still going on strong.

Years later, living in Arizona, I miss the flavor of falafel almost daily. Since I cannot find any good falafel around me I set out to recreate the recipe. After a few months of my family tasting batch after batch of experiments, I think I finally came close enough. 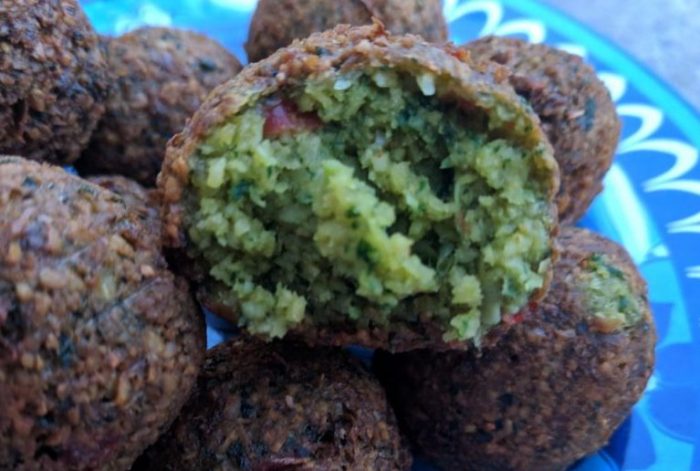 Place the chickpeas in a container with 4 cups of water and 1 teaspoon of baking soda. Water should cover the chickpeas by at least an inch.

Drain the soaked chickpeas and rinse in a colander under cold water.

Add soaked chickpeas and process in ten 2 second pulses until you achieve a rough grind on the chickpeas. Be careful not to over process the mixture. Cover the mix and place in the refrigerator for half an hour.

Heat vegetable oil in a dutch oven or other heavy pot to 375ºF. While the oil is heating form 1 inch round balls. Working in small batches fry the falafel balls in the oil until deep brown, four to five minutes. Use a slotted spoon to remove balls onto a baking sheet lined with paper towels. Fry the rest of the balls and serve hot.

Does Using an Instant Pot Make Me a Chef?